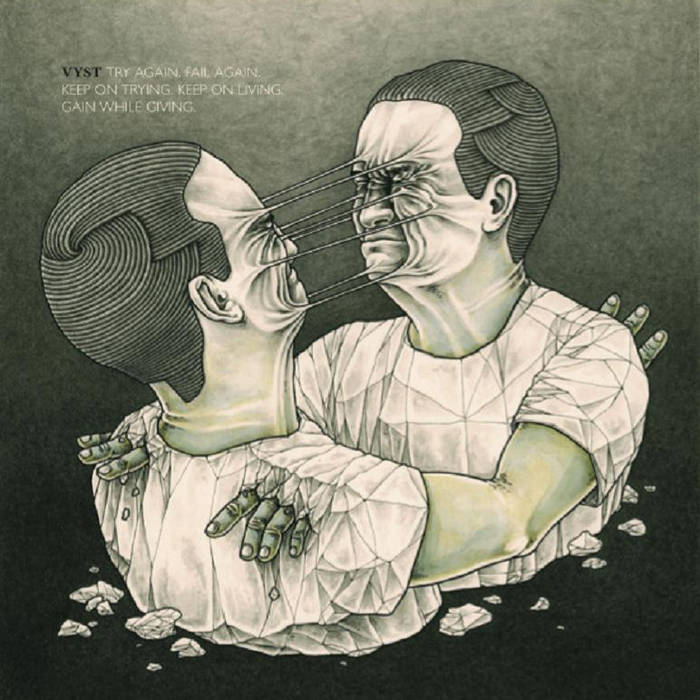 "Here’s a surprisingly awesome shard of hardcore I only just came across. What made me take interest was that VYST contains members of Throwers, Glasses, and Perth Express.

VYST will surely join the ranks of other great new German hardcore acts if they haven’t already.

“Try Again. Fail Again.” is a half-hour of darkly tinged hardcore with some great ferocity displayed in each of the nine tracks featured here. They dip into moments of melody on some of the longer tracks like “Towards the Cliff”, “They Run”, and “Count Me Down” and their briefness makes them all the more powerful.

The production is quite good also, everything rings clear and sharp bringing out the heaviness of some of the slower, crunchy passages. Vocals are wonderfully raspy and hoarse, rending his throat as he runs through issues both bleak and uplifting, contemptuous and angry.

VYST don’t rely on dissonance. Merely powerful riffs that move from high speed punk to a moment or two in sludgecore territory (almost) to a short melodic or melancholic (sometimes clean) section — briefly there will be in a few songs a rough tremolo passage just touching on something blackened.

Not injected with the blazing sludge found in Perth Express and yet not being as strictly hardcore as Glasses, VYST have found a comfortable middle ground with a very minor blackened-crusty influence without completely falling into the ever-popular splinter genre of dark hardcore; and it works very well.

Actually they probably have more in common with their brothers in Throwers than the other two groups which is more on the dark dissonant side of the sound. There’s some excellent arrangements to be heard on “Try Again…”, very catchy and abrasive, fast with some hammer-blow heaviness sprinkled at just the right moments. Quite an enjoyable listening experience all the way through but nothing that could be said to be “off the beaten path”. Just solid, head-bang-inducing hardcore." ( cvltnation )

If you like try again. fail again. keep on trying. keep on living. gain while giving., you may also like: